On the Map: A Mind-Expanding Exploration of the Way the World Looks. Simon Garfield. Gotham Books. Paperback. $17.

Mr. Garfield’s book might also have the subtitle of, “Why you should care about the geography of Liberty City.” For those of you who are not familiar with Liberty City, allow me to fill you in.

While you may not be entirely familiar with Liberty City, per se, one would have to live in a cave or be completely detached from the news media in order not to have some idea of the controversy surrounding one of the world’s most popular video games of the last decade. Liberty City the fictional location for the popular series of Grand Theft Auto

video games. In Grand Theft Auto, players are not simply encouraged to engage in anti-social behaviors, like car-jacking, assault, robbery, shooting people, blowing things up, and perhaps even negotiating with prostitutes, players are required to perform most of these actions simply to play the game. Liberty City is virtual city in which all of the mayhem takes place. Early versions of the game were based on maps of London, with real local place names (toponyms) replaced with names chosen by the game developers, their families and friends. Subsequent games have been based on other real cities, New York, Miami, or regions like Southern California.

In the fantasy genre, perhaps the most elaborate and intricate world created, to date, is the world of Skyrim. Skyrim is not so much of a game, but an experience. I say this never having played the game, only after discussing the game with dozens of people. Skyrim (Bethesda Software, LLC) is the latest entry in the “Elder Scrolls” role-playing fantasy games series. Skyrim is an “open world” meaning game experience is non-linear. Players are able to roam across the vast expanse of the virtual world and explore at-will, to engage challenges and puzzles as they deem necessary. To create the vibrant and detailed landscape of Skyrim, dozens of video game cartographers at 99 Lives Design were enlisted to construct this virtual country. And, Skyrim is a country, on the continent of Tamreil, on the planet of Nirn. 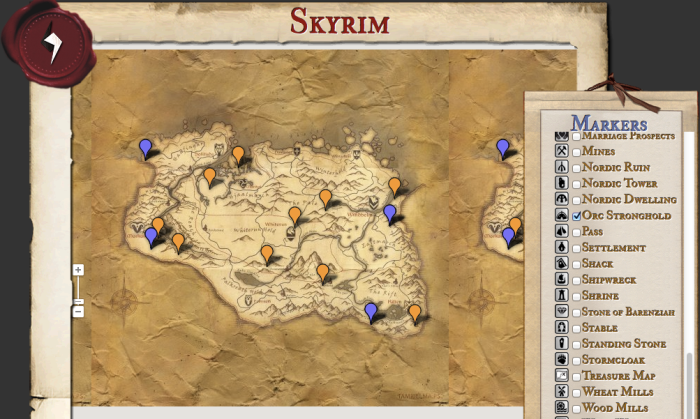 Many popular culture examples exist for me to draw material from but I don’t want to deviate too much from my review. Garfield also weaves into his meandering non-fiction account of the history of cartography other fantasy worlds, such as “Dungeons & Dragons,” created by the late Gary Gygax, and J.R.R. Tolkein’s of realm of “Middle Earth.” The point of my early sidetrack into virtual and fantasy geographies is first and foremost to capture your interest in cartography.

Secondly, I argue the notion of mapping and cartography is not a dead endeavor. In fact, cartography is as powerful, if not more so, than at anytime in human history. Garfield presents an anecdotal 2010 story of an accidental invasion of Costa Rica by Nicaragua based on erroneous Google maps, for example. [Wired story] Google, Microsoft, Nokia and TomTom, plus TeleAtlas, Navteq, OpenStreetMaps, and hundreds of other companies are working every day to expand geospatial awareness across our planet. Google is often brought into international courts based on mapping efforts associated with Google StreetView. [Germany:CNN; Brazil:BBC] Never in the history of the world have at least 5 billion people had the capability to use a device to see their rooftops as a bird would all the while sitting in the comfort of their home, in their pajamas, even.

Simon Garfield’s story does not begin with these examples. Mapping began with the evolution and history of Homo Sapiens. Mapping most likely predates any spoken language, definitely written languages, and absolutely spell-check. Early humans were undeniably scratching out places in dirt, sand, mud in order to communicate the locations of deer, elk, bison, mastodons, edible fruits, water, dangerous neighbors, and shelter. Scientists like Richard Dawkins [article] hypothesize mapping and spatial cognition may have been responsible for the rapid expansion in human brain size, at least in part.

Garfield’s book leads the reader along a sequential history, more or less, of cartography and mapping. We are treated to a non-academic look at many of the forefathers and grandfathers of geography, Eratosthenes, Ptolemy, and Strabo. Despite teaching cartography and geography, I still am amazed by the sophistication of early Greeks in measuring and describing the Earth so accurately. For Eratosthenes to have calculated the Earth’s dimensions to within about 3% I find brilliant.

Maps throughout history have almost always implied ownership, regardless of whether the lands were occupied already or not. European expansion, colonization, and domination, for instance, almost always resulted in local populations failing under subjugation of the European power. That power was reflected by the maps of the time. The maps of Abraham Ortelius and Willem Blaue, both Dutch cartographers, reflect the growing influence of European powers during the 16th and 17th centuries.

Many Americans might be able to name cartographer whose name was used for naming the American continents (or at least sound his name out and get reasonable close), but most Americans have no idea the power of the early Dutch cartographers who designed, authored, and published the first atlases. The Dutch today are still mapping powerhouses, being the home of TomTom and TeleAtlas (Amsterdam, The Netherlands).

Garfield presents the readers with a series of mental maps (cognitive maps), taking the reader on a journey through time, geography, and space. One of the more famous and early GIS efforts involving the collection of spatial data was the mapping of the London cholera outbreak. Garfield later describes occasions of larceny and theft by those who adore maps perhaps a little too much. Cartography has also been used throughout history to discourage people, explorers, countries, and companies from entering certain locations. For almost a century, a mountain range along the western coast of Africa turned many away from the northern portion of the continent. Then, a few cartographers discovered the mountain range didn’t exist.

Cartographic wishful thinking may have been responsible for the birth of science fiction. In the late 19th century, astronomer Percival Lowell [American Museum of Natural History] was captivated by the planet Mars. Especially intriguing to him were the dark lines and shapes across the red planet. His scientific prowess was no match for his daydreaming mind, and he conflated those shapes and lines into nothing less than intelligently-constructed aqueducts, plains of vegetation, and nothing short of evidence of life.

Jules Verne, H.G. Well, and Ray Bradbury would use the hysteria surrounding the potential of life on Mars to advance human creativity and entertain millions with their stories and radio shows.

Get yourself a copy from Amazon

“On the Map” is an interesting, non-academic perspective on the arts, science, politics, and propaganda associated with map-making over human history. I found the book enjoyable. As I stated earlier, Garfield’s progress is mostly linear, though he does wander of track enough to keep things interesting, such as illustrating how the Mercator projection continues to enjoy continued use in spite of a few superior map projections. Garfield does not entertain any of the substantive mapping companies, like ESRI, the purveyors of ArcGIS, though. He discusses some history of Google Earth, Google Maps, and Apple’s recent misadventures with its own mapping effort. You won’t find any mention of ArcGIS, or MapInfo, or any other commercial or open source mapping software.

Thanks to my recent readers: