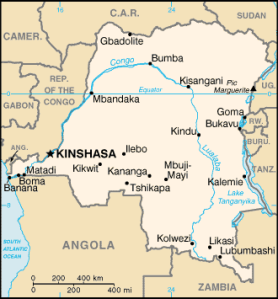 While most of the world has been distracted by events in Iraq and Afghanistan, Africa has been challenged by forces within and without.

The Democratic Republic of the Congo, the largest state in southern Africa, is the site of the deadliest conflict in the world, surpassing even the Iraq War and Afghanistan, combined.

Since 1998, nearly 4 million people have died within the DROC as a result of this conflict, either through direct armed conflict or due to starvation and disease. The number dead is about 8% of the 62 million people that live in the DROC. Women, and girls have been victimized, raped, killed, tortured by roving bands of militia. Boys have been taken and are being trained as militia members. These boys are kidnapped then trained how to kill.

The major warring factions involve the Congolese army versus the militants of a renegade general Laurent Nkunda, the National Congress for the Defense of the People (CNDP). The fighting that continues today reflects hostilities leftover from the Second Congo War, also called Africa’s Second War, and the Great War of Africa. 8 countries and 25 different groups fought during the five years of the formally recognized conflict.

In looking at multiple sources of information, Wikipedia, Human Rights Watch, BBC News, CIA World Factbook, I cannot really find the source or cause of the fighting. I ran across a reference to Nkunda being upset over the treatment of Tutsis, leading him to form an anti-Kabila militia. His support for Tutsis in Africa does not seem to justify his guerilla war or atrocities committed by people under him. He was indicted for war crimes in 2005.

I write about this now, as fighting as increased in the last couple of days, forcing many to leave their homes. According to The World yesterday, nearly 50,000 have been forced out of there homes because of the conflict. We, sitting in our comfortable chairs in the US, have been mostly oblivious to the conflict in the DROC.