Stefan Templeton, the object of the author’s research, did more in his life to 9 years old than I’ve done in all of mine, I think. Born of a Black father and a Norwegian mother, Stefan was already a well-versed world traveler by 9. His upbringing is almost the stuff of legend. A mother who developed a unique form of therapy (“biodynamics”), and a father who groomed him with martial arts, Stefan learned to help and protect people, sometimes violently.

Early in his childhood, in Baltimore, attending the city schools, bullies frequently picked on him. Until he got bigger, became adept at Tai Kwan Do, and made an example of a few boys. Then, he became somewhat of a neighborhood legend, until fists were replaced by knives and guns. He was then shuttled back to Norway, France, and England for schooling.

Templeton becomes a ladies man. His natural good looks, his mixed ethnicity plays well among European girls and women. Girls and women, single and married crawl all over him as he matures along the Spanish coast. At times, when his father recalls him to the U.S. and puts him back in school, Stephan finds the environment hard to deal with. Having already dived the waters of the Mediterranean, he has little in common with his naïve classmates.

Before his 21st birthday, Stefan has already run drugs, been threatened by an Eastern European mafia, run illicit gems through Gibralter, and delivered antibiotics to Peruvian Indians in the  Andean highlands. Fascinated by Jacques Cousteau, he enrolled a dive school that specialized in training divers for Cousteau. Despite being a good diver, he was told that his status of being an American citizen would prevent him from ever setting foot on a Cousteau ship. He was then recruited to do other diving work, oil rig and ship jobs.

His restless nature took him to Japan where he worked as a bouncer at a nightclub. A fight with a drunk Iranian landed him in jail. In jail, he taught English to Yakuza, and they made sure he was properly fed. A fight with a young Yakuza punk led to him fleeing Japan for Thailand. Thailand allowed him to further train for a long-time ambition of fighting in the K-1 Martial Arts Championship. Muay Thai fighting, training, as well as illness seemed to take its toll, as he never appeared to make his dream fighting dream come true.

In 2004, the horrific earthquake and subsequent tsunami helped him put his energy to use, helping deliver supplies. During his involvement in the Banda Aceh earthquake/tsunami disaster relief he became upset over the immense amount of inefficiency between governments, between militaries, and among humanitarian groups. Stefan took his knowledge accumulated over the years, from college and university training, and from his own personal contacts, and established SPEAR, a humanitarian agency. 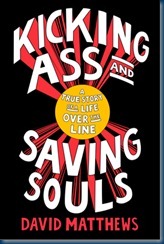 The story was interesting, starting near the middle of Stefan’s life rather than the beginning, falling from a balcony after being surprised by a Yakuza gang member. Matthews prose is loose and free, and reads quickly. Matthews is a childhood friend of Templeton, a friend who admittedly did not believe much of what happened to Stefan. With each of Stefan’s appearances and disappearances from Baltimore throughout his childhood, his tales and adventures seemed to grow in scope and detail, dreams and adventures of youth.

As an epilogue, Matthews tracks back through Stefan’s history. They both revisit homes and former dwellings of Stefan’s early life, meeting people from Stefan’s past. Matthews adds his own incredulity to the epilogue, yet realizes that Stefan has essentially led a very dramatic life, even from a very young age.

Did Stefan kick ass? Yes, he seems to have had his share of fights. From fighting in his neighbor, to fighting in London, to his episodes in Tokyo, he was not adverse to breaking someone’s nose.

Did Stefan save souls? Well, metaphorically, probably. He was not a priest, and his humanitarian missions were of his own creation, of his own device, not affiliated with any religious organization. If placed within the context of doing good work, giving kids antibiotics and water, and trading gems for supplies, one could say he saved some lives, and thus saved some souls.

Stefan has led an interesting life, for sure. An inspiring story, maybe. Stefan sees that something needs to be done, like helping the survivors of the Honduran hurricane in 1984, and figures out a way to help. His tale could inspire people to get off their butts and go make a difference in someone’s life.