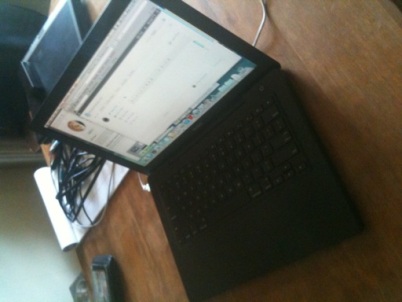 Only yesterday I became the proud owner of a 5-year old Macbook 3. For years, the mere thought of owning anything Apple was anathema to me. I did not want to belong to any snooty Apple clique, change my wardrobe to include turtleneck shirts nor thick high-collared sweaters seen adorning male models in an L.L. Bean catalog.

If Microsoft is English, then Apple is French, and UNIX is Sanskrit, and like hell I was not learning French. I have dabbled in Sanskrit, metaphorically, being a Systems Administrator in a 100% UNIX environment. IBM’s AIX and Sun Microsystems Solaris operating systems provided me days of amusement.

My near life-long abhorrence of anything Apple, (or at least as long as Apple’s life, anyway} I honestly find barely explicable. The first computer I learned to program on was an Apple IIe. My dad offered to buy me an Apple IIe like the one from my computer bootcamp, but I opted for an Atari 800 (which I still have and as far as I know, still works.) In high school, we had Radio Shack TRS-80s. At the time, these grey boxes seemed very cool, with their giant 5-1/2″ floppy slot.

Back in the day, the 1980s to those who are not familiar with the era “day” refers to, I followed the exploits of Apple and Microsoft, Jobs and Gates, and IBM, Compaq, Hewlett-Packard, and any other jumpstart who thought about developing a personal computer and/or operating system. My dad enjoyed finances, which is to say, he enjoyed pouring over the stock charts at the end of the Kansas City Star. He showed me how to read the charts, the His, Los, Sell, Open, Close statistics. In those days of the early 1980s, probably around 1984, Apple sold for about $16 a share. My advice to dad was prescient, if I say so myself: “You need to buy Apple. You’ll be rich someday.” He offered a sage reply which I often use to this day: “Don’t buy what you don’t understand, and I don’t understand that stuff.”

Had my dad bought Apple at $16 and weathered the storms, the figurative hurricanes which assaulted Apple throughout the decades, yes, he would be well-off today.

I favored Apple even back in the 1980s, aware of innovation at work in this new technological upstart. I could never bring myself to ever own one. My world was a Windows World. Windows computers were less expensive and over time became the de facto standard computing platform. I missed the era where Apple achieved a significant presence the classroom; otherwise I might have adopted a Mac earlier. More software seemed available for the Windows platform, and the entire milieu of Intel/Windows was easier to grasp.

Especially in geography, my chosen field, Apple never really found widespread adoption. Mapping software was available for the Apple. ESRI and MapInfo both offered GIS software solutions. ESRI dropped Apple support in the mid-1990s pushing Apple out of my discipline, except in those rare places  adopting software from bit players in the GIS field. ESRI was then and still is the dominant software purveyor globally; when the market leader dumps support for an OS following suite is sometimes not an option. Apple found great success in the graphics design and publishing realm, though, outside my discipline and field.

Apple is now THE world-leading technology company. No other company can make such boast. While being such should stoke my fuel for continuing reticence in becoming an Apple user, indubitably Apple designs great products, much of the world now enjoys Apple products, Apple is now a main-stream technology, not relegated to the magazine editors, publishing houses, and graphic artists. Everyone now has the potential of authoring iPad & iPhone apps, which brings Apple from the niche to the front aisle at the grocer.

I enjoy my iPhone, donated by a friend of mine. I enjoy the iTunes store and the numerous free podcasts available, including Freakonomics radio, and the Amateur Traveler. Brilliant stuff. And the ubiquity of Apple products creates an augmented market for people knowledgable in Apple technology. If only Apple would ease up on restrictions on 3rd party service, allowing people to train and allow repairs of broken screens. Apple could inspire a decent cottage industry for high school or college kids to earn some extra cash repairing cell phone screens.

I author this post using my “new” used Macbook. Previously, I used a 10-year old Toshiba Portege 3500. My little Toshiba Portege with the swivel screen served me admirably, especially after doubling my ram (512mb to 1gb.) When I wrote at coffeeshops, libraries, etc., people were amazed at my little Toshiba, and still are today, despite the onslaught on tablets. Toshiba did a remarkable job with the Portege 3500.   In my picture above, my Portege 3500 can be seen in the background, gazing longing out the window, wondering what its future portends.