I’m writing my post from my “13-inch Late 2007 MacBook” while I follow updates regarding Tropical Storm Isaac on my iPad 2. I have my iPhone 3GS within arm’s reach as my iPhone is the only phone I own. While appreciate Apple’s devices, I am not an Apple fanboy. I cut my proverbial teeth on MS-DOS and PC-DOS, have experience in Sun Microsystem’s Solaris (both Unix and x86 flavors), in IBM’s AIX (another Unix flavor), and have used a variety of Linux versions. However, due in part to wide-spread adoption of Microsoft programing and operating system environments, I have some experience with every MS OS since Windows 3.

Apple’s victory over Samsung will have some interesting ramifications for the technology industry, some good, some not so good, and some bad.

Of some note is the disparity in international legal decisions with respect to Apple’s legal claims as pertains to their patents. Most Americans may not be aware Apple has sued Samsung not only in the United States, but in Germany, in Italy, in the UK, in South Korea, in France, in the Netherlands, and in Australia.

In Europe, and in South Korea, Apple has not made much headway in patent battles. The reason behind their inability to find favor abroad seems to be related to courts abroad being immune to notions that rounded corners should be a patentable feature.

The idea behind patenting is to protect a real and useful “concrete” technology from being stolen by others and to provide the developer time enough to recover costs and make a little money. The idea must be able to be engineered and  implemented. The idea must represent a new and unique advancement of the natural sciences. In other words, mathematical formulas, business processes, the presentation of information, and software cannot be patented. Yet, another way, you cannot hold a formula or process in your hand; you can hold the tangible outcome of the utilization of a process in your hand, but not the process itself. 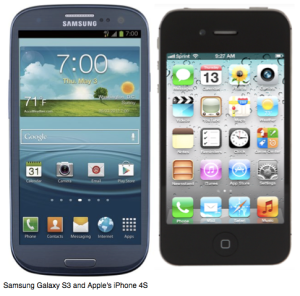 Are consumers really so dumb as to think the Samsung is literally a generic iPhone?

My response to the above is, no, shapes and gestures are “open source.” In other words, they are not unique and represent no form of technological enhancement or contribution. In fact, language is “open source,” too.

If language were not “open source” imagine the complexity of paying people who license every word imaginable and also licensed every permutation of every possible letter combination which might result in a new word. Every author would become instantly bankrupt.

Yet, in the United States, that seems to be where we are heading. The US Patent Office allows companies to patent their software code. Allowing patenting of software code is much like allowing Stephen King to patent all the words in his books so no one else could use those books. What S King does is copy-protect his stories, and to some extent he is offered protection from other writers deriving verbatim his works. Musicians cannot copyright the notes they use, but they can copyright the composition and lyrics.

In Europe and abroad, computer languages are seen much like spoken or written languages. Companies are limited as to what they can protect with software patents. Code which accesses a DVD drive, or a software port, or a mouse, or calculates the volume of a sphere – I’m sure there are better examples cannot be patented simply because of the finite number of ways such events can occur. To sue someone because of button placement, button appearance, or button behavior is simply asinine in most European countries because these do not meet the criteria of being new and unique advancements.

In the United States, though, we seem to be heading down the path where even small snippets of code are patentable.

Take the Oracle v. Google lawsuit related to Java. Google was able to eke out a winning decision v. Oracle. In Europe, a similar lawsuit would doubtfully succeeded, as well. The judge did say the judgment did not apply to all APIs, however. The European High Court ruled against the US company SAS, stating “a computer language or the functionality of a computer program cannot be copyrighted.”

The theme behind my comments reflects the changes the US patent system must implement to ensure and promote innovation and squelch those who simply want to be paid for property which is falsely labeled as “intellectual.” Rounding edges, pinching screens, and vague descriptions of techniques for communicating using copper wire or via wireless communication networks need to be filtered before entering the patent system.

One comment I read this morning hinted the decision might be a good one for the industry. The judgment against Samsung will foster MORE innovation, not less, the contributor argued, because people will have to be more creative to avoid Apple’s design elements. Companies need to stop jumping on the bandwagon, for sure. Samsung is a global telecommunications company and has been a dominant player in the smartphone market. True, Samsung made some very bad choices which essentially gave the jury no choice but to find in Apple’s favor. However, if Samsung had simply said, “Oh, a smoothed rectangle works well in pockets, briefcases, and backpacks. Now, let’s build a brilliant phone” they probably would have been OK. Instead, they opted to nearly reverse engineer an iPhone, which is really dumb, and now Samsung’s own stupidity has brought a queasiness sense of dread to an entire technology sector, putting everyone on edge. Hopefully, though, the verdict will act as a cold splash of Reality in the faces of technology design teams around the world. “Oh, shit, we’ve been mesmerized by Apple. Duh. OK, everyone lets get creative.”

As a direct result of the decision, lawyers will undoubtedly play an even bigger role in technology design simply to prevent further patent legal issues. Is this really good for innovation, to have more legalese involved simply to make sure Technology A does not “steal” from Technology B? Do we really want lawyers designing our technology?

“No, the radius of the curve is 0.57. The i6 has a curve radius of 0.54. That is only an 8% difference; that will never hold up in court. Your going to have to use a chamfered corner, instead.

No, you cannot use rounded icons. Let me consult the list of open source shapes, and those shape which have yet to be patented. Hmm, well, octogons are out. The octogon shape has been patented by the UFC. Uhm, no pentagons, either. Homeland Security doesn’t want terrorists to be constantly reminded of what the Department of Defense building looks like. No triangles, either; GLBT have patented all triangle variants and most shades of pink and purple. Well, I’m going to have to get back to you on this.”

All of this might seem silly, yet in light of swimmer Ryan Lochte wanting to patent the word “Jeah!” my comments seem pretty realistic.

Patents, in a sense, create a monopoly for the owner. In a corporate sense, hegemony, which is worse. Hegemony means complete ownership and domination. An examination of Apple’s suits worldwide, as I discussed earlier, almost argues Apple is looking not simply for protection of intellectual property but complete hegemony over the global telecommunications markets, using local, regional, national, and international court systems.

I realize the jury made their judgment based on current US legal doctrine. The judgment might be “lawful” but was their judgment “prudent?” Recently, the Norwegian mass murderer Anders Brievik was sentenced to 21 years in prison for his crimes, the maximum legal judgement in Norway. In the United States, with 100% surety Breivik would have spent his remaining days in prison, or been executed. In Norway, Breivik’s sentence was “lawful” in that he was punished to the maximum Norwegian courts allow, but was his punishment in proportion to the deaths of 77 people, most of them schoolchildren? That is my point. Sometimes, what is lawful is not necessarily proportional to the crime nor prudent.

Sidenote: Breivik will probably never again see the light of day. After commenting in court he didn’t kill enough people, the judges will most likely extend his sentence. In Norway, while the maximum sentence is 21 years, options exist for extending prison terms by 5-year increments.

Patents were designed to be granted for tangible objects which represent new and unique technologies developed from knowledge of the natural sciences. A CD, or DVD, or Blu-Ray, or SD card reflect patentable materials. However, patent laws in effect today have not changed much to account for technology, innovation, or rapidly changing global economies. Pharmaceuticals are in the same IP/Patent boat which affects the prices we pay for medication, potentially keeping them artificially higher than they should be.

The patent process needs to be fully examined to ensure fair and equitable standards are implemented which work to the benefit of designers, developers, and consumers.