Three traits about NED one might want to know about the book. First, most proceeds from the sale of the book are being donated to three organizations: allinallthetime.org, navysealfoundation.org, and tipofthespearfoundation.org. If nothing else is gained from the reading of NED, three worthy organizations have been aided by your purchase.

Only the last third of the book has anything to do with Operation: Neptune Spear, the mission to kill Osama bin Laden (Codename: Geronimo). Nice graphics accompany Davis’ (Mark Bissonnette) account which help showcase the efforts and the detailed intelligence available. But, don’t look for 300 pages of 100% Operation: Neptune Spear.

On the plus side, the last 100 pages provide a complete and utterly boring account of the killing of Osama bin Laden. “Boring” is not to be construed as an insult. Boring is what happens when practice makes perfect, all details go according to plan, our service people all return safe and sound, and the mission is accomplished. Yes, a UH-60 was lost and scuttled. Considering Operation: Neptune Spear took place deep in a sovereign country, right next door to Pakistan’s military school, an hour north of the Pakistan capital, Islamabad, under cover of darkness and the crash of the UH-60 resulted in nary a single injury, the mission was a resounding success. I say “boring” because the SEAL himself said the mission was boring, boring when compared to the myths about Operation: Neptune Spear which would evolve in the hours and days after the news of the death of Osama bin Laden became public. There was no 40-minute firefight. Osama bin Laden did not fire back or even fire a weapon even once. One of his sons may have fired a weapon. His courier fired a weapon. Both of them died. Considerable effort was made to recover significant quantities of items. And, all of this was performed inside of 40 minutes, before the Pakistani military or civilian police could arrive and complicate events.

I found Davis’ (Bissonnette) story compelling, though not captivating. I have read many accounts of military operations, journals of soldiers, pilots, tank drivers and did not really learn much. A reader with little background in military literature may enjoy Davis’ anecdotes of his early service, though.

The one book which might be captivating is the book yet to be written regarding the gathering, compilation, analysis, and interpretation of years of intelligence which culminated in Operation: Neptune Spear. Davis alludes to the intelligence, and speaks of the CIA analyst “Jen.” Jen confidently asserted the odds of Abbottabad being home to Osama bin Laden as “100%.” Davis also related how many years the gathering of intelligence, of planning, of meticulous research had gone on, and how no one wanted a repeat of Operation: Eagle Claw. ODC was the 1979 mission to rescue 53 hostages held in Tehran, Iran which failed almost before it started, and against which all secret military missions have been judged. So, being a bit of an imagery, intelligence, GIS, geopolitics freak myself, I would look forward to the book documenting the intelligence.

Mark Davis, the psuedonym of SEAL Mark Bissonnette, has been threatened by civil and criminal charges based upon the publication of his autobiography. The government, especially the Department of Defense (DoD), threatened legal action based on the presumed disclosure of secrets. The problem I have with this – and I can appreciate needing to keep some things secrets, like Valeria Plame’s identity – is within hours of the news of Osama bin Laden’s death, news media already had details about the military unit responsible (SEAL Team 6), where the action took place (both Abbottabad and Pakistan), how long it took (40 minutes), and even Mark’s sister knew of his appointment with President Obama within hours of Mark himself finding out. So many leaks within the government; people accused President Obama of being the leak source but nearly every legislator, both Democrat and Republican were blabbing to anyone who would listen both fact and fiction.

Buy the book to help veterans, to get a detailed account of Operation: Neptune Spear, and don’t be surprised if it takes a couple hundred pages for the mission to get started. 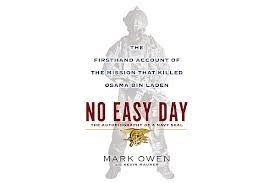