How many times have we heard or seen some reference to the alleged purity of rainwater? People set out barrels or buckets to collect rainwater for some purpose, maybe even to drink. But, how pure is rain?

Most textbooks don’t go far enough in my opinion. Sure, our authors talk about microscopic particles, suspended in the atmosphere, which become the condensation nuclei for water droplets. But, I don’t remember reading any specific examples other than “dust, bacteria, and chemical compounds.”

In the latest edition of Popular Science a small column discusses the particulate matter which helps form rain. In a recent study, air samples were harvested during the 2010 hurricane season. Particulates were separated from the air filters and classified. In addition to pollen and dust, several types of bacteria and fungi were collected. Living bacteria and fungi. Some of the samples returned e. coli bacteria, the family of bacteria found in animal waste. Not all e. coli bacteria is dangerous, by the way. The bacteria has to be cultured or have its DNA sequenced in order to distinguish if it is “bad” e. coli.

The question becomes, “How did the bacteria reach so far up into the atmosphere?” The answer is actually pretty simple. Storms. Storms churn up dust, debris, and all sorts of particulate material laying around on the ground. Hurricanes have powerful winds which churn the air. Tornadoes have powerful winds which churn the air. Haboobs and Derechoes are strong wind systems which can churn the air and entrain microscopic particles in the soil.

Next time a strong storm passes through your neck of the woods, think about the local farm, the pasture, the cattle lot all exposed to the open air. Think about the chicken and turkey houses which vent to the outside air. Some of that bacteria will become entrained with the moving air and be lifted aloft.

Why don’t people get sick, then? They do, actually. Here is a CDC article about the fungal infections (mucormycosis/zygomycosis) which sickened many people after the Joplin, Missouri, tornado.

A couple other questions are more difficult to answer. “How important is bacteria and fungi to cloud development?” and “Why are these bacteria still alive?”

No one has a good answer to either of these questions. Atmospheric scientists (chemists, physicists, and biologist who specialize in atmospheric science) have no idea how important bacteria and fungi are to cloud formation. And the populations of these bacteria and fungi vary if one samples over land or over water. Does that make a difference? No answer to that question, either. 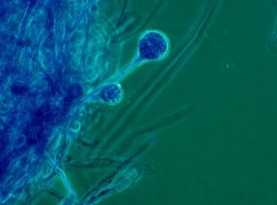 One of the many types of fungi floating in the air after a big weather event, like the Joplin tornado.

So, next time it rains, and you see kids running around outside trying to catch raindrops, or snowflakes, on their tongues, that raindrop or snowflake is like a “box of chocolates; you never know what you’re going to get.”

One thought on “What’s In That Raindrop?”