Cancer added my boss, Dr. Kit Wesler, to its constantly growing list of victims Monday, January 4th, 2015. As a few people angrily commented during Friday’s Celebration of Life tribute ceremony: “This is the 21st century; why are we still fighting cancer?” Be this situation as it may, and while I do have some very unsophisticated thoughts to address comments like these, Kit still passed away, and the science community is lessened by his passing. 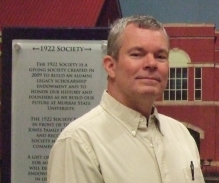 One of my on-again, off-again readers of this blog was my boss. Dr. Wesler was the director of the research center where I provide hardware, software, and technical support, host technical workshops, and engage in training Secondary teachers on occasion. Kit did not edit me, but Kit had such a varied background as many academicians do, his comments had an accuracy and precision which often tempered or guided many of my own thoughts. 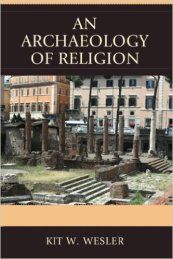 Kit was immanently knowledgeable in his own field of archaeology, specializing in Mississippian cultures, Native American cultures, with a special interest in documenting the Caribbean slave trade. In spite being an atheist, Dr. Wesler had a fascination with world religions. During a 2014 sabbatical, he studied religious sites throughout Italy, Greece, and Portugal. In previous years, he visited eastern Turkey to examine 1st century Christian religious sites. Kit was vigilant in his observations. He noted not only the site and excavation techniques but also any and all technologies employed in site management and data collection. If a group was using some sort of technology, Kit was right there to determine what the tech was, how the tech is being used, do you find it useful? What did you use before? What would make this tech better? Always asking questions.

When Kit returned from a 2013 European archaeology conference, he was all jazzed up. “We have to be doing this stuff! Archaeology in the United States is being left in the dust by the techniques being used in Europe.” During this particular conference, many archaeology agencies in Europe were showcasing considerable amounts of technology. Drones, for example, were being used to help map dig sites and evaluate the extent of archaeological sites. LiDAR was being discussed, and many agencies were utilizing GRASS and Quantum-GIS (QGIS) as their GIS software (as opposed to ESRI’s ArcGIS).

About the same year, Kit and I set up the Terrain Modeling Laboratory within our Department of Geosciences. We bought a data projector, a 3D printer, a 3D scanner, and a large scaffold for mounting doo-dads. The dean of our college added a stream table. The notion behind the Terrain Modeling Lab was to develop ways of replicating cultural environments to aid in educating our students in these environments in a virtual way. The addition of the 3D equipment was to fulfill the desire to develop collections of artifact replicas which could be boxed and delivered to schools to assist in teaching social studies and science courses.

But, these was his more recent goals. About 2005 or so, Dr. Wesler had become mesmerized by Linden Labs “SecondLife.” If you aren’t familiar with SecondLife, think of the video game, “The Sims,” where players build their own virtual neighborhoods, do things to earn in-game currency, and essentially life a virtual life. SecondLife is pretty much like this. Players can download developer tools, build their own virtual landscape to their own specifications, in an open Internet-based online environment. Kit dreamed of developing a virtual landscape which rendered as accurately as possible life 1,000 years ago along the Mississippi River, from as far north as Cahokia Mounds (in Illinois, near St. Louis), to as far south as Memphis.

One of my graduate school peers, a Ms. Brown, set the tone for his technological interests. While in graduate school in the mid-1990s, Ms. Brown developed a 3-D model of pottery shards for Wickliffe Mounds, Kentucky. Using Arcview GIS and the 3D Analyst extension, she rendered Wickliffe Mounds as a terrain model. Now, Wickliffe Mounds is not a very big place, covering perhaps 3 acres or so, more or less, but this rendering of GPS points with depths of shards left an immense impact on Dr. Wesler. Other graduate students would follow suit, using GIS and viewshed analysis to study the Civil War battlefield at Fort Donelson, Tennessee and assist in helping another archaeologist transcribe 18th century journal notations into map locations in a hunt for an early frontier fort.

About 2012, Kit bought a Parrot 2.0 drone for himself. Then, he bought one for archaeology. In 2014, he partnered with our local wildlife biologist to use his superior drone to fly a nearby archaeological site in preparations for a new dig.

For someone so fascinated with ancient history, for the most part, Kit had no problems diving into modern technology to figure out ways to manage, improve, assess, analyze, or interpret archaeological data. He took database classes to create database products to manage our local collections, as well.

All of those traits would be plenty for a great colleague, someone who appreciates and supports technology. However, his interests carried over into pop culture, too. 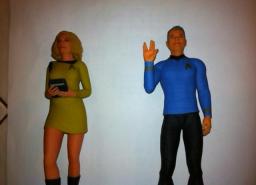 Dr. Wesler was a huge Trekkie. In 2013, I ran across Cubify, a new 3D printer company, hawking personalized Star Trek figures. Send them a series of 3 head-shots and they would print you a personalized head atop a Star Trek figure. Kit ordered two figures, one in his likeness, the other in his wife’s. When the figures arrived, he called me to his office. I thought I was in trouble, as I am at times, as I don’t watch my mouth as I should. When I arrived, the figures were out on his desk, his face beaming with the exuberance of a 9-year old boy who just mastered a new level. “They even got [my wife’s] hair right!” Evidently, he ran these figures across campus the very same day as many attendees at his tribute recalled Kit bursting into their office with his figures. And, if you knew Kit, he doesn’t burst into anything. It’s a rare and unique day when Kit got excited, like when his Star Trek figures arrived, or if someone touched is red toolbox.

Kit was a devotee of George R. R. Martin, having read all of the currently available books. He gave me his hardcover books a couple years ago as he had recently received a nicely-bound set as a gift. Kit was also a published fantasy author himself, was very interested in writing fantasy, and an owner of a very collection of Robert E. Howard’s writings, and an insatiable reader of non-fiction, crime noir, and fantasy and science fiction. He and I would discuss authors like Harlan Ellison and Philip K. Dick, and discuss popular takes on science fiction reboots. He, for instance, thought J.J. Abrams re-imagining of Star Trek was fine. I, on the other hand, thought it was pure dreck; I’m not a fan of time-travels/time-warps to drive plots. But, because he was so well-read, always offered careful and poignant insight and had well-reasoned arguments for the sentiments he held.

Kit’s death to struck me like Luke Skywalker catching sight of Vader striking down Obi-Wan, perhaps like Obi-Wan watching Qui-Gon Jin be killed by Darth Maul. That is, the loss of a friend and mentor to a greater power, cancer. Kit probably wouldn’t exactly appreciate my analogy. He was, after all, a Trekkie and never cared much for the Star Wars Universe. Cast in that vein, Kit’s death is like that at the end of Star Trek: The Wrath of Khan, then, Spock dying in the di-lithium crystal chamber to my Scotty. Yet, these are fictional characters and while we cherish these characters whose adventures have spanned decades, they are not real, not are their exploits real. Kit had real exploits. He worked in Africa, in Kenya, researching and writing about the leaders of the Zulu Nation. He spent many years in Jamaica, seeking to identify and restore important sites of the slave trade, in part so Humankind will never forget Man’s inhumanity to Man. He traveled throughout the United States, China, and Europe engaging with other educated people both to learn and collaborate.

Regardless of one’s field or discipline, everyone deserves a Dr. Wesler-type mentor. Someone patient, with a vision, knowledgeable, who can make good decisions from taking in the viewpoints of others, yet someone who advocates for progressive positions in order to strengthen scholarship and advance the discussion of important topics. Kit’s leadership was fundamental to directing many of my efforts to re-organized our research center in order to increase our visibility, promote our message and opportunities, and engage our university’s service region. Kit also felt a little out-of-his element in his position however his vision and perspective provided opportunities for flexibility, to be nimble, something Higher Education always espouses to desire yet literally struggles to adequately achieve. His approach allowed a freedom of expression and movement instilling a comfort level in those around him encouraging dialogue, consensus, and eventually an action plan.

Many of us need people in our lives to help rein us in, to help keep us focused, to help separate our mental wheat from mental chaff, so to speak.

To say I will miss our daily conversations is an understatement.