I need to state this at the onset of this post, otherwise I may be accused of being a supporter of “running education like a business,” but I am not supporting the notion of running any educational system as a business.

We, and by we I mean those of us in education, cannot on the one hand argue for more efficiency, more flexibility, more adaptability in education and ignore some fundamental principles of business in the other hand.

We cannot request our faculty and staff to submit ideas, concerns, or suggestions to help improve the quality of a student’s educational experience, then cling to the status quo of “that’s just how it’s done.”

Ok, technically, we can do all of those things. All the above happened to me this week. Nothing prevents anyone from saying one thing and doing another. I expect administrators to be introspective, thoughtful, and wise, not completely immune to making logically inconsistent statements and requests. No one is immune. But, highly educated people when faced with their logically broken thinking should replace that thinking with new thinking, not cling to the Ways of Old from Days of Yore.

Education should be nimble, right? We become exposed to new information, new data, new insights, and then we update our knowledge with this new knowledge, and our thought-process update with all of these new details. Going to college is like getting Microsoft Updates, in a sense; we are downloading new mental apps into our processing units, new drivers, patches, and fixes, and hopefully, when we wake up the next morning, our biological operating systems have been updated with new and improved ways of doing things.

I am often approached by students who ask, “When was the last time Dr. Crayola updated his notes?” Or, “When I had this course  10 years ago Dr. Quicksand was using that Powerpoint presentation. Do faculty not have to update their lectures?”

I’ve taught at colleges and universities since 1993. Preparing for a course is extremely time-consuming. Many of my peers work on their courses during the day, evenings, and weekends. These diligent folks are not only preparing Powerpoints but also educating themselves about topics. Faculty knowledge varies; our knowledge runs a spectrum from little to no knowledge of a topic, to near-complete encyclopedic knowledge of a topic.

Some topics require constant vigilance. Technology course must change and update all the time. I say “must” but because everything is grounded on the vagaries of a faculty person, change is not always coming.

I can understand FORTRAN being taught, sort of. FORTRAN, like Pascal, are both languages which serve an important community – high performance computing (HPC), like those environments in and around super-computers. But that is an esoteric community, a valuable one, for sure, but a fairly small one.

ADA also serves an important but esoteric community. Air traffic control systems are programmed in ADA. Many military applications controlling missile and rocket systems use ADA. Flight control systems for the Boeing 777 were written in ADA.

Sorry for verbosity, but sometimes college and universities teach topics they want to teach rather than what the regional businesses and employers need. Colleges and universities succumb to hubris.

How is that nimble?

Colleges and universities are ripe for disruption as I argued in a previous post. Some parts of bureaucracy are a necessary evil. But, like businesses and corporations, colleges and universities need the leadership to be nimble, to be free to adapt, to change, to learn – perhaps even in real-time, to changes in demographics, to business and industry, to new knowledge.

We cannot argue for “innovation and entrepreneurship” and “out of the box-thinking” from our students while we cling to legacies of methods and mindsets literally centuries old.

We cannot argue for “innovation and entrepreneurship” and “out of the box-thinking”from our students while teaching from notes a decade old.

We cannot argue for “innovation and entrepreneurship” and “out of the box-thinking” from our students while refusing to embrace technologies designed specifically to enhance those qualities.

Funny; I am the first to admit I frequently say, “no.” Students walk into my office, ask a question, and my most common response is, “No.” But, my goal is not to shut them down. My goal is to engage them in a debate as to why they need to do what they want to do. I want to hear their reasoning, their thought processes, their goals, and their outcomes. A “yes” does not get me that information. I want to play Devil’s Advocate and see what they understand. Then, when I see if they become disheartened, I stop and then I take on their argument. Usually, students have good ideas but haven’t thought about all the details, or may be unaware of how things work and have built their idea on a false set of assumptions. Then, we work out the details. My initial “no” then evolves into a qualified “yes.”

I’m not saying this is the best routine, but pragmatically, I find it works most of the time. Maybe not truly nimble, but inside of an hour, progress is made and everyone can move forward.

Colleges and universities require an ecosystem allowing for nimble adoption of new ideas. Anything else is damaging, really.

Colleges and universities, like businesses and corporations, need to embrace failure, learn, adapt, and try again. The conversations I had this week were all founded upon fear and failure. Fear of what people will say, think, or do. Failure to understand technology, failure to trust, failure to even try – TO EVEN TRY.

A college and university with a failure to try, and a fear of what people will do, say, or think.

We, those of us in education, can cling to our bureaucracy, our safety net, our same shit, different day of our collection of Powerpoint notes, our fear of technology, and our failure to recognize changes.

Colleges and university administrators can tell us to “be nimble.”

Perhaps my issue is my really my own. My father took me to leadership conferences ever summer. Zig Ziglar, Norman Vincent Peale, Billy Graham, Col. Oliver North, and a bunch of others. Sitting in Kemper Arena, Kansas City, or Municipal Auditorium, Kansas City, listening to recognized leaders in their fields divulge their secrets. Honestly, I was bored to tears. Then. Then, I was bored. Today, I recall the enthusiasm those people had for their life, their job, and their experiences. I recently read, “Without Their Permission,” by Alexis Ohanian, founder of reddit. I’m reading, “The Lean Startup,” by Eric Ries. Move quickly, react quickly, adapt quickly, pay attention to your customers, know your customers. These are common themes. And these themes conflict with the current state of some institutions of Higher Learning.

I recently ran across a fellow. During our conversation, he said, “It’s better to wait and get permission than to move and do something that won’t be approved.” I said, “Hmm. No. It’s better to move, and act, and do something. Show people your idea works or could work. You aren’t acting maliciously, so you are not deliberately setting out to damage anyone. And, as the occasion arises, then apologize. Otherwise, you won’t get anywhere; or, someone else will be more nimble out maneuver you.” He looked at me like I was destined for jail, maybe out on bond.

I ran across another administrator the other day. He said, “You can’t just go out and buy a 3D printer without having a plan.” I said, “I don’t want to argue the point, but, yes, you can. Anyone can go out and pay $900 for a 3D printer and start showing kids how to use it. No plan necessary.” Now, I did go on to explain we did have a plan, an intended use. But, we never needed to involve the bureaucrats. We simply acted, bought, setup, configured, and printed. 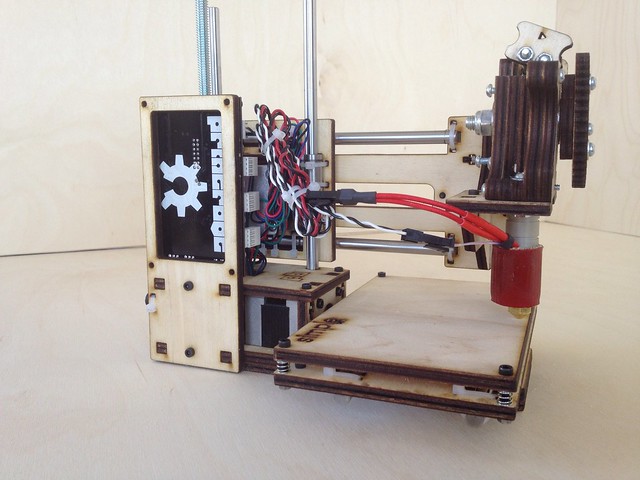 One of my peers, acting on his own, took his Printrbot Simple to his daughter’s elementary class for a “show-and-tell.” He allowed them to use it, demonstrating how it worked, and printed some items. That is being nimble. That is doing. That is acting.

Many examples around the United States of people who simply act for the benefit of others with positive results, especially in Make and Maker and DIY.

Don’t expect us to take the “be nimble” request seriously when nothing else about education is nimble and admins won’t practice what they preach.

One thought on “Higher Education Is Anything But Nimble”