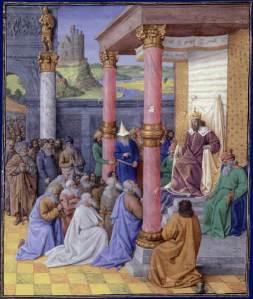 As our story opens, the Hebrews are slaves of the Babylonians. The Babylonians are attacked or invaded by the Persians. Persians: 1, Babylonians: 0.

Under the new Persian rulers, particularly Cyrus, the Hebrews fare somewhat better. In fact, Cyrus the Great, who the Hebrews anoint as a Gentile Messiah because they love him so much, sends the Hebrews on a mission to rebuild their temples in Jerusalem, giving them the resources to do so.

If the Persians, specifically Cyrus and Darius, had not intervened when they did, the Hebrews might have been a footnote in history. And then where would Christianity be?

The Book of Ezra contains the details of the biblical story. The Book of Isaiah also contains some elements of the story.